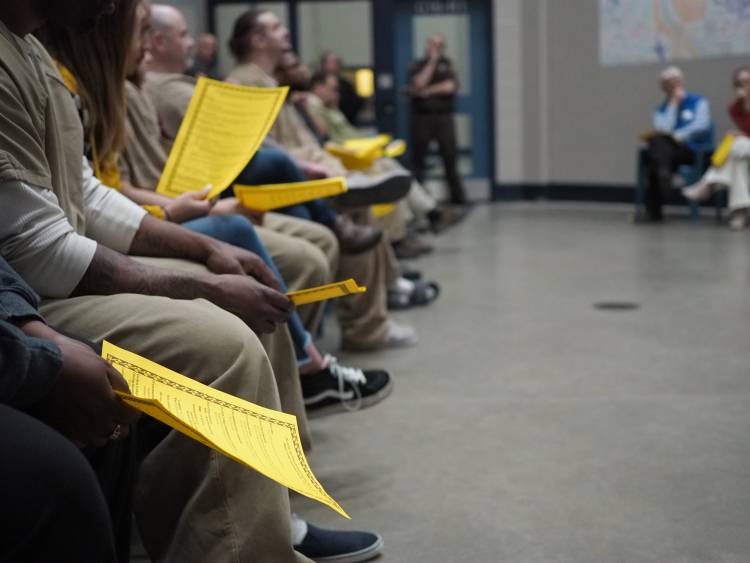 ELKHART — When Goshen College Academic Dean Ann Vendrely read the names on the certificates, her pronunciation was crisp.

The students rose from their plastic chairs in a ward of the Elkhart County Corrections Center.

They shook the hands of Goshen College President Rebecca Stoltzfus and the four instructors of the two Inside-Out classes.

All 45 students in the two classes over the first three weeks of May took nicknames and stopped using their last names. At the closing ceremony on May 21, those were the names on the certificates of completion for the college course, whether they were inmates at the jail or students who are enrolled and attend classes on the Goshen College campus.

It’s the sixth year Goshen College has taught a class inside the Elkhart County jail south of Elkhart, but the first without Carolyn Schrock-Shenk, who brought the program to GC and Elkhart County. She died Feb. 6. This year, Glenn Gilbert continued the work he started with her and was joined by Sara Klassen to teach the “Justice In Our Lives” class with 26 men and women. Nineteen women were in the “Borders, Boundaries and Bridges” class with Saulo Padilla and Michelle Milne.

Kris Klosinski, an administrator at the jail, talked about how complicated it was to establish the class with Schrock-Shenk, but has never regretted it.

“From day one,” Klosinksi said, “it has been my privilege to watch the transformations that take place in the lives of students in just a few short weeks.”

Every year, she has to convince some inmates to take the class. Every year, the inside students tell her it was “the best, most memorable, and most meaningful thing they ever did in jail.” Some inside students, if released during the class, continue returning to the jail to attend.

She also watched outside students become more confident as they interact. “Students who come from very different worlds and backgrounds, who have little to nothing in common, somehow finding out that they aren’t so different after all,” she said.

Gilbert told me after the ceremony about a student who went from doubt about the class to journaling about how it changed his life and made him look at fatherhood differently. I’ve heard GC students over the years point to the class as the most meaningful of their college career.

In the class focused on justice, coursework explored the criminal justice system and the roots of justice. Silly Stephanie, who was elected to share on behalf of the class at the closing ceremony, said they had to stretch to meet each other and laugh with each other.

“It has been so important to laugh because so much of what we talked about has been anything but funny,” she said. “We learned a lot about justice, each other and ourselves.”

Delightful Dujuan, who also shared on behalf of the Justice class, welcomed the guests at the ceremony, including myself, Elkhart County Commissioner Mike Yoder and Goshen City Councilwoman Julia King, to the jail. In an eloquent reflection, Dujuan said the class was one of the best experiences of his life and understands a third way of responding to violence. Instead of fight or flight, nonviolent resistance can actually work.

In the Borders, Boundaries and Bridges class, the women used stories and the arts to reflect on the variety of ways those three things are represented in the world.

“We pushed past our own personal boundaries,” said Awesome Annie during her reflection, “and climbed over walls we’ve put up over the years.”

The women from the class stood together and performed a vocal reflection titled “We are…” The ceremony also included poetry and a rap. Artwork done during the class was on display.

More than 150 colleges and universities have sponsored Inside-Out courses since the first one in 1997, according to the Inside-Out Center. More than 200 correctional institutions have hosted them. In all, more than 35,000 students have taken the courses in more than 1,000 classes.

As Positive Penny described in her poem “19 Women,” “two different worlds come together as one.”

In this one world, people are people. These people can learn and grow and earn second chances. Education has value. Listening results in seeing something differently and being better for it. That doesn’t just make people better. It makes a community stronger too.

Marshall V. King is a freelance writer and photographer who has worked in Elkhart County as a journalist for more than 20 years. You can read his Food For Thought each Monday and his Dining a la King column each Friday.
See the Full Story >