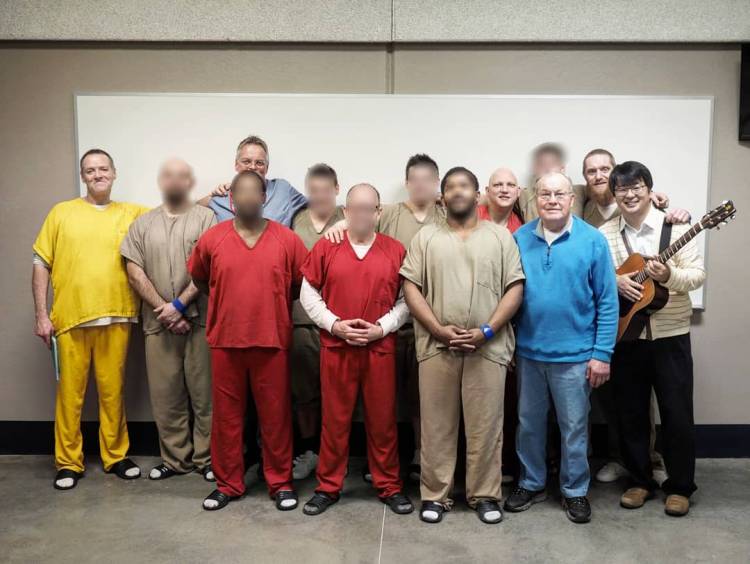 ELKHART — On a recent Sunday afternoon, Sungbin Kim stood inside a locked room at the Elkhart County Corrections Center, playing a borrowed guitar.

He’d start to sing and then a dozen other men would join in. Ten of them were wearing colored scrubs as jail inmates. Together, they sang — vigorously and loudly. Together, they were a choir led by a Korean man who almost became an ordained Presbyterian minister, but left behind that stability to come to the United States and study at a Mennonite seminary.

About 20 of us who are also volunteers sat in hard blue plastic chairs listening and occasionally singing along with these praise songs. We had a sheet with the lyrics for the 14 songs the men had been singing together starting in January. The lyrics spoke of grace and the love of God, victory and hope.

One inmate told of a story of having a difficult day with grumbling and even hatred. As he started to sing, the darkness receded, according to Kim.

He didn’t expect to be singing with inmates in northern Indiana, but Kim followed his convictions and a call larger than himself to minister.

He’s loved those praise songs and led worship at a Presbyterian church in the suburbs of Seoul, South Korea. He was a full-time pastor overseeing youth and young adult programs.

“I met every condition to be ordained,” he said in an interview last week.

He had been discerning about his ordination when a ferry sank and killed 304 people, most of them youth, in April 2014. Initial media reports in Korea said all onboard were saved and five hours later switched. Who ordered that coverage is a mystery, but it prompted Kim to look at the relationship between the government and the church denomination of which he was part.

He had heard of Mennonites and started connecting with an Anabaptist group. He left his pastorate, which came with housing, a car and stability. In July 2015, he arrived in the United States for the first time. After Seoul, Elkhart was too calm, but now he loves it.

He enrolled at Anabaptist Mennonite Biblical Seminary to study biblical languages and became an intern at Yellow Creek Mennonite Church.

He had been losing vigor as a pastor in Korea, where people are polite and the culture is hierarchical, but people don’t communicate freely. At Yellow Creek, a country church that is part of Mennonite Church USA, Kim began teaching Sunday school and taking part in the jail ministry that some of its members do with those in the jail and as they exit it.

“I never expected jail ministry,” he said, but as he prayed, it became clear that it could be invigorating alongside his studies.

During the volunteer orientation, he heard one of the presenters say the jail should have a choir, so he asked Jail Chaplain Cory Martin if he could lead one. Weeks later, Martin had it set up and invited Kim to the jail to start.

“I was afraid,” Kim said. He wasn’t afraid of the men he would face, but of going through the heavy metal doors to lead a choir. He’s in America as an Asian student on a visa. He carries a small device to help with translating English, but it doesn’t help him grasp humor or idiom.

At the jail, he and the men pray together, share and sing together. As he went to minister to the men, they embraced him.

“With the choir, I was overwhelmed,” he said.

These men inside the jail reached out to Kim. As he went to them, the met him and welcomed him. “They have been the people who welcome me the most in this continent,” Kim said.

On Sunday nights, they gather to sing. It’s not always on key, but it’s fervent.

“They are hoping and yearning for a better future,” he said of the men wrestling with their mistakes and how to recover.

As he wrestles with culture and call, Kim is going on to get a master’s of divinity at AMBS rather than the master’s degree focused on languages. Ministry is calling to him. He’s starting a Bible study at the jail in addition to the choir.

In a jail, of all places, a Korean pastor and student found hope.

Marshall V. King is a freelance writer and photographer who has worked in Elkhart County as a journalist for more than 20 years. You can read his Food For Thought each Monday and his Dining a la King column each Friday.