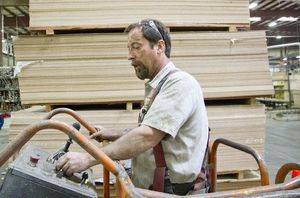 ELKHART — Two years ago, Doug Cuney stood in the middle of his jail cell, feeling hopeless and that his life had no purpose.
On Tuesday, Cuney stood in the middle of his living room with renewed hope and purpose in his life.
Cuney had been sentenced to jail time and reporting probation after being arrested for driving while intoxicated in 2013 and booked into the Elkhart County jail.
“I was jaded, down and out and had lost everything I had because of my drinking,” Cuney said. “I am a licensed electrician and I lost my business, my wife, my family, everything.”
During his stay at the jail, another inmate took him to a Bible study where Cuney said he met Cory Martin, chaplain of the Elkhart County jail ministry.
“He stood up and shook my hand. In time, I opened my heart up to Jesus,” Cuney said. “Cory told me when I got out of prison he had a friend who owned an electric company and was willing to give me an interview. No promise of a job but just an interview. It gave me hope to know that here was a man who didn’t know me and was willing to interview me. It gave me hope that maybe someday I might have a life outside of prison.”
Martin’s friend and potential future employer for Cuney was Justin Moyer, owner of Moyer Electric Inc. in Wakarusa.
“I knew Cory through the jail ministry and when he told me about Doug having electrical experience, I had my doubts. This is a highly-skilled trade and I had my reservations,” Moyer said. “When Cory called me after Doug got out of prison and said he was at a work release center (Elkhart County Community Corrections) in Goshen, I picked Doug up and we went to Bob Evans, where we talked for almost three hours. I offered Doug a job on the spot.”
Since Cuney hasn’t been able to drive yet because of his sentence, employees at Moyer Electric have picked him up and taken him home from job sites every day for the past year, Moyer added.
“It’s been a team effort and everyone deserves a chance,” Moyer said. “I was willing to give Doug a chance and it’s hard finding people who are highly skilled in our industry.”
Another person who has made a difference in helping Cuney succeed is Russ Hostetler, a volunteer with the jail ministry and member of Waterford Mennonite Church in Goshen.
Hostetler said he met Cuney through another inmate, who mentioned Cuney hadn’t had any visitors during the first six months of his stay in jail.
“Doug and I hit it right off and we met every week until he was sent down state to prison,” Hostetler said. “I wrote him letters and Doug told me he wanted to go to our church when he got out. So I introduced Doug to the congregation through the church newsletter and gave them his address in prison. He was welcomed with open arms because everyone already knew he was an ex-con and what he had done.”
According to Cuney, the acceptance from the congregation has been overwhelming, he said.
“The church has been there to help and nurture me. They helped bring my wife (Joyce) and I together again,” Cuney said, with tears in his eyes. “I felt like a piece of crap and if it wasn’t for these people, I wouldn’t be here. It’s good stuff. I have a beautiful life being sober. I refuse to lose it. I have to wake up and go to work, be a loving husband to my wife, work on rebuilding relationships with my daughter and my mother again. It started with the seeds in jail through the jail ministry. I water them (the seeds) every day. I felt hopeless at one time but now I feel beautiful on the inside.”