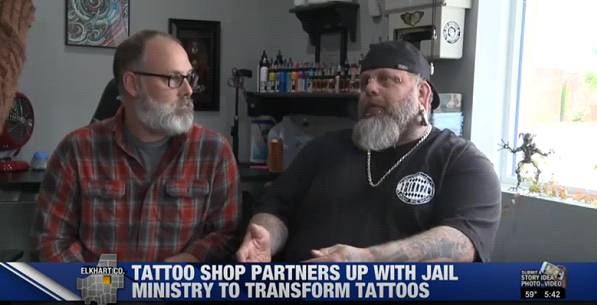 ELKHART COUNTY, Ind. (WNDU) - NewsCenter 16’s Kim Shine explains a new partnership in Elkhart County that’s helping former inmates let go of their pasts. “People who are leaving or being released from jail or prison have enough obstacles to overcome,” said Cory Martin, chaplain of the Jail Ministry of Elkhart County. And once a person is freed, the associations they had behind bars may become barriers to the new life they now want to lead. “When you’re covered in gang tattoos or racist tattoos or hate tattoos, that’s just one more obstacle that you have to get past," Martin added. After hearing about the ministry's work, the co-owner of a Goshen tattoo shop offered to help former inmates cover up their hateful tattoos. Jake Kinsey, of Goshen Ink Therapy and Body Piercing, will provide cover up tattoos for free. “I don’t see charging them for something that can make their life better,” Kinsey said. Kinsey’s been tattooing for more than 20 years, and it was his own past that made him reach out to the ministry. “If I can do a tattoo on somebody and he can go out and get a job and become CEO of a store or something like that – that’s great, I helped that," Kinsey said. Inside the jail, the ministry is using its new laser to start removing prisoner tattoos. It’s a lengthy, elective process that roughly 150 inmates have already started. Once their design is light enough to cover and they are released, they can visit Kinsey’s shop for a cover up. “It’s just one more kind of tool in the toolbox that we can have for people who are trying to do something different with their lives," Martin said. The inmate tattoo removal process started about a month ago. And because the partnership with Goshen Ink is so new, no former inmates have gotten a cover up just yet. But Martin says the interest is there. In the future, the Ministry plans to raise funds so they can buy a second laser machine to help former inmates continue their removal process once released. See the Full Story >