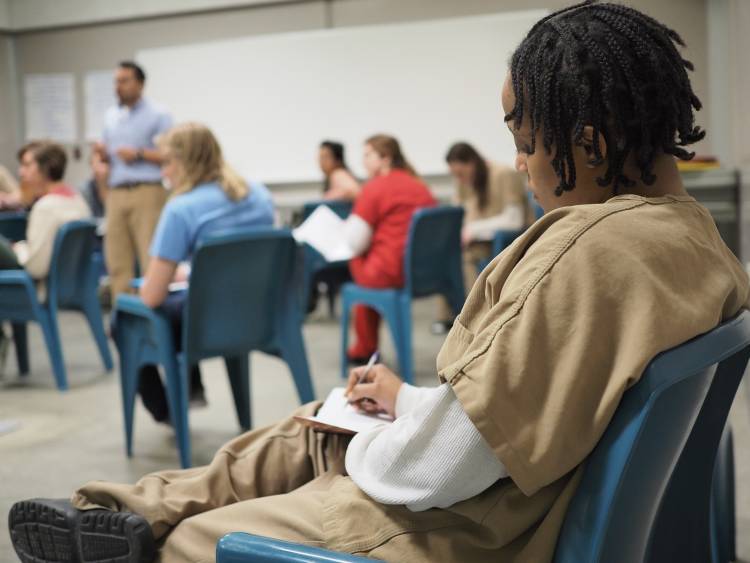 On a Tuesday morning in a large, bare room deep in the Elkhart County Correctional Facility, 15 women – some in street clothes and some in tan or red or yellow prison uniforms – stood in a circle holding hands, and sang a song called “I found God in myself,” based on a Ntozake Shange quote.

The women were students in the Inside-Out Prison Exchange course. Half the students were from Goshen College and the others were “inside” students.

“The first time I heard them sing that song, it gave me chills,” said Michelle Milne, assistant professor of theater and one of the class facilitators.

When they finished the song, there were few dry eyes. The song was part of a closing ceremony – a graduation of sorts – for the two Inside-Out classes that took place at the Elkhart County jail this spring through the college.

For three weeks, three hours each morning, students in both classes circled up, alternating inside and outside students, and discussed ideas of restorative justice and their own experiences. In all, 19 Goshen College “outside” students and 20 “inside” students took part in the two classes.

The women’s course, titled “Borders, Boundaries and Bridges,” was led by Milne and Saulo Padilla, immigration education coordinator for Mennonite Central Committee U.S. The class examined the criminal justice system through the lens of both literal borders, such as between the U.S. and Mexico, as well as metaphorical boundaries, such as religious or cultural differences. Music, movement and art were woven throughout the class to explore these ideas.

“As we got deeper in the course, we began digging into how we experience this in our personal lives, how we tear down those walls, how we build bridges,” said Eva Lapp, a 2015 graduate who took the class and served as a teaching assistant.

Lapp also took last year’s pilot “Justice in Our Lives” class, the first Inside-Out Prison Exchange course offered at the Elkhart County jail, and was so moved that she attended a national Inside-Out training along with Milne and Padilla.

“I realized through the course last year, the first day you go in and have a tour of the jail and it’s awful and it feels foreign and uncomfortable, and then you take the course and you get to know these wonderful people, and by the end it’s hard to describe the feelings you’re experiencing,” Lapp said. “There’s no way to describe it, it’s just something completely different than any other course I’ve taken, because it feels so real, you’re learning from people around you instead of just absorbing knowledge.”

One of the most moving sessions took place on the Monday after Mother’s Day.

“It came up that Mother’s Day is really, really hard for obvious reasons when you’re in jail or prison,” Lapp said. “Which most of us outside students didn’t even think about until we heard about how hard it is for these mothers being separated from their children and children being separated from their mothers – it suddenly hit me how incredibly powerful this course is.”

“That made a huge impact on the class,” Milne said. “That day was really hard to leave.”

At the same time, in the men’s division of the jail, the “Justice in Our Lives” class explored topics including violence and masculinity, crime and punishment, restorative justice and nonviolence.

“The level of emotional engagement and challenge was quite profound,” Schrock-Shenk said. “Several of the inside students got in touch with emotions they haven’t felt in years, if ever. To watch a guy in a prison uniform get choked up at the end about what happened these three weeks, then having him look confused and say that that’s never happened before is a holy thing.”

Schrock-Shenk was a driving force behind last year’s pilot class and has been a champion of this kind of education inside prison walls. Courses of this nature can be transformative for both college students and people who are incarcerated, and have been shown to reduce the number of repeat offenders.

“Reports back to me have been phenomenal; this class is obviously life-changing,” Elkhart County Sheriff Brad Rogers said. “It’s a little extra work for us, but it’s well worth it when we see the results.”

The international Inside-Out program was founded in 1997 at Temple University and Graterford Prison, both in the Philadelphia area, and has since spread to more than 100 colleges and universities in the United States and around the world.

Unlike other Inside-out classes around the country, which meet for a full semester, the Goshen College program is more intensive, since they meet daily during the month of May, and is one of the first Inside-Out class to take place in a county jail rather than a prison. Despite the different approach, students in both classes described it as a powerful experience.

“This experience by far has been the best I have ever gone through from the ‘inside,’” said Will, an inside student. “For once, to be heard, understood and humanized.”

Not only does the class give inside students the chance to express themselves in a college setting, it breaks down stereotypes from both inside and outside students.

“In the beginning I wasn’t sure how the outside students would view us and now that class has come to an end I admire and adore their hearts and open minds. This class is a huge benefit.” – Denise, inside student

“I was impressed by how gentle and kind these men were when they had every right to be bitter and angry. Don’t get me wrong, these men were upset, but they still maintained a positive attitude and refused to let their anger define them.” – Andrew, outside student

“It gives me hope. Hope for our future generation. The outside students are the voice for us on the inside who have no voice.” – Flynn, inside student

“I often felt that in the midst of a difficult and possibly defeating situation, and in a bleak building, we created a sacred space to entertain hope for the future.” – Bri, outside student

“I may have learned as much about myself and the way I view things as I did about the way others do.” – Ken, inside student

“I am delighted that I had this opportunity to expand my world and my heart.” – Julie, inside student

“I learned to laugh and be happy despite my situation. I learned to study and strive for knowledge no matter where I am. I learned to give and take second chances. I learned to take responsibility of my own life and be aware that my choices will affect others around me.” – Phil, outside student

“(This class) gives me hope that on the outside there are still things and people that offer the help to be able to continue with my life and to go forward.” –Fransisco, inside student

“There are so few opportunities for real dialogue and relationship between people who are and are not in the jail/prison system. Getting to know the inside students is a good reminder that they are not defined by a single status.” – Eliana, outside student

“We started with nothing and, like improve, we all grew into a community of people that enjoyed each other’s company and opinions. We grew as one.” – Merne, inside student

“I don’t want to say this class will ‘haunt’ me, because that has negative connotations, but I certainly won’t be able to shake this class off any time soon. I’ve been changed in a way I have yet to understand and moved in a way I will never forget.” – Abby, outside student

“I take hope, joy and motivation to set off in a new found way of living.” – Kurtis, inside student