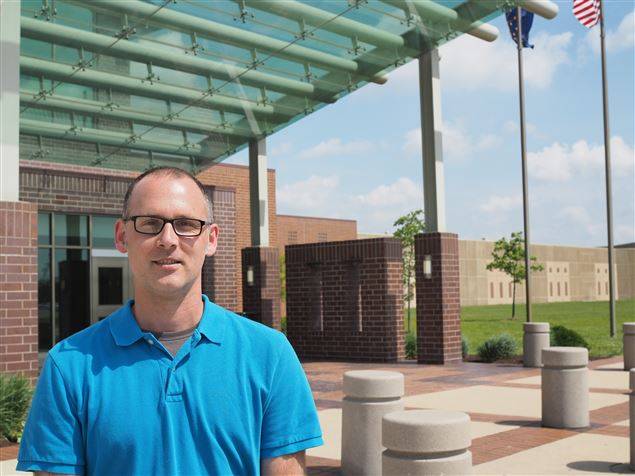 There’s a village in the country on the southwest side of Elkhart.

It’s not a conventional village. The residents don’t get to go outside or even walk down the wide-paved areas.

As Sheriff Brad Rogers said, “We’ve got like a small town in here.”

About 650 people are in the Elkhart County Jail. Cory Martin is their chaplain and he has a slightly smaller village — about 500 volunteers — to help run about 100 programs a month for the inmates.

It’s holy work for the former congressional aide for Chris Chocola and Mark Souder. He was also development director for The Crossing Educational Center. “I think I have more encounters with God here than I do in church,” he told a group of non-inmates gathered in a classroom Thursday morning. Once a month, Martin hosts a breakfast at the jail for people from the community.

Martin believes he spent too much of his life avoiding the people Jesus instructed his followers to spend time with. Now he’s counseling inmates.

“Their sins landed them in jail. My sins didn’t,” he said, noting that it’s easier to hide his sins because they don’t break the law.

Jail is a lonely place, and Martin and his assistant chaplains and volunteers try to help, he said. Ministry doesn’t always mean having a Bible study. It can mean having a conversation or conducting a book group. One volunteer records audio of female inmates and delivers it to their children.

Someone may spend a night in jail or up to five years, Martin said. When he started two years ago, he saw recent inmates walking down county roads near the jail, so he arranged volunteers to be available to pick them up, take them out for a meal, and then drive them somewhere.

Jail is a lonely place. Leaving it can be too. Martin said they work to be practical and help inmates develop a plan for when they leave. “If they don’t have a plan by the time they walk out the door, we’ve lost them,” he said.

An inmate named Henry spoke to the group Thursday morning about how he hopes to have a business, reunite a family, but also minister to others in jail or prison. “I’m broken. I’m tired,” he said, adding that he wants a spiritual walk now, not what he had on the street.

In jail, tough conversations can actually be easier, Martin said. Being straight with someone has a different kind of value than on the street. Not everyone wants to talk about faith, but many do. Martin is chaplain too for those who have a faith other than Christian.

He’s not a county employee. He works for a nonprofit formed 30 years ago by local pastors to provide a jail ministry. To do his job he needs access, but Rogers, a devout Christian, is happy to provide that.

“I have other sheriffs and jail commanders who think I’m crazy,” Rogers said, but he believes he has fewer problems because of the jail ministry.

Measuring the success of a jail ministry is difficult. Sometimes it means someone stayed out of jail five months instead of two, Martin said.

He has stories of how someone changed his life, got sober, got a job and got his life back after years of messing up. He and his wife, Shannan, walk alongside someone who’s been in jail and prison and now calls them his parents.

When others have given up, he doesn’t. When others are cynical, he tries to have faith.

Before the visitors left Thursday morning, they gathered around the inmate and prayed. They put hands on his arm or shoulder. One man raised a hand over Henry’s head. The prayers were said to a God people believe can change lives.

“We’re investing,” Martin said. “We’re doing things. We may not see the result. And we have to be OK with that. We’re just called to be faithful. We’re not called to save people.”

Marshall V. King is community editor for The Elkhart Truth and food columnist for Flavor 574. You can reach him at 574-296-5805, mking@elkharttruth.com, and on Twitter,Instagram and Facebook.
See the Full Story >