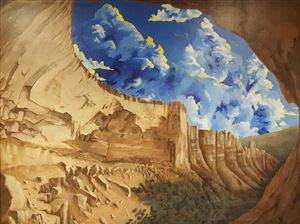 ELKHART — The sound of footsteps bounces off the blank tan walls that line the inside of the Elkhart County Jail. The only bright colors within its hallways are the inmates’ clothes and a mural of vibrant blue clouds scudding over jagged cliffs.

Its artist knows what it’s like to walk those halls.

When he was arrested and sentenced to 60 days in jail, all C.J. Miller wanted to do was keep his head down. Jail chaplain Cory Martin, on the other hand, had other plans for Miller.

Martin is a part of the Jail Ministry of Elkhart County, a nonprofit organization that provides more than 100 different programs and church services for inmates every month. More than 500 volunteers, 100 churches and 23 assistant chaplains are also involved in the program.

And it’s talent, such as Miller’s, that they are trying to bring out of inmates through the various programs.

“We have artists, we have poets, we have writers, we have singers,” he said. “And it does something to their self-esteem when you go to them and say, ‘Hey, I’ve seen some of your art. Would you mind doing it on an entire wall in the jail?’”

The idea for the mural started with a conversation between Martin and Elkhart County Sheriff Brad Rogers.

Martin would sit down every month for lunch with Rogers, who told him about Miller and his talent. Some of Miller’s artwork already hung in the administration building, and Rogers suggested Miller paint a mural on one of the walls in the jail.

“We have inner parts of the jail that most of the public won’t see, but these inmates see this area every day,” Rogers said. “So why can’t we maybe be an encouragement. Let them be uplifted, maybe even motivated, to do something good like this as well.”

For Rogers, jail isn’t just a warehouse for inmates. It’s about “trying to change hearts and minds,” the sheriff said.

“These are human beings that have made mistakes, and if we can allow them to be involved in some programs and activities that will keep them, one, occupied; and, secondly, to direct their thoughts and their actions toward positive actions,” Rogers said.

The Sheriff’s Department had some discretionary funds “generated by the inmates themselves,” which Rogers could put toward such projects to improve the jail. After looking through some sketches to make sure the painting was not political or overly religious, jail officials put art supplies in Miller’s hand.

At first, other inmates gave Miller flak for his drawing. But as it got closer to being completed, they started asking him why he was doing the mural and how it was connected to his Christian beliefs.

The cliffs in the mural are an actual place in Israel, Miller said. His inspiration for the mural came after reading a verse in the Bible in which David and his men managed to escape Saul and his army through the gorge of Sela-Hammahlekoth.

There was something about David’s escape that resonated with Miller, and he hopes other inmates will feel the same way. Sela-Hammahlekoth means “rock of parting or escape” in Hebrew, after all, he said.

Miller is now a free man, but he has returned to the jail to paint another mural, which looks through a gorge out at a waterfall in Oregon, Martin said.

“The thought was to give inmates of the jail some outdoor scenery,” Martin said, adding that Miller has already sent in a sketch for a third mural at the jail

PROGRAM HELPS IN MANY WAYS

But that’s not the only way the Jail Ministry of Elkhart County has helped inmates. The nonprofit provides art, creative writing, crocheting and biblical Hebrew classes, among other activities. There is even a program for mothers in jail to record themselves reading a children’s book or delivering a message to their children, which a volunteer from River Oaks Community Church later burns onto a CD and delivers to their family.

The philosophy of Jail Ministry of Elkhart County is to not only build a relationship with inmates while they are in jail, Martin said. It’s about loving them and helping them once their incarceration ends.

“The ministry is so much more than teaching people about Jesus,” he said. “I think our relationship with Christ is at the center of all of this, but I think we have failed at our duty if all we do is teach people about God and show them nothing. They get out and they have nobody to help them in life. A lot of these guys , they get out of jail and they don’t even have someone to pick them up and take them home.”

Martin said he grew up in a family where he knew what to expect in life, from graduating college to getting married and having a family. But that life plan is not something many jail inmates even think about, and the nonprofit’s programs give them opportunities they wouldn’t otherwise have.

And when he sees the mountains where David made his great escape, Martin also sees hope for the inmates of the Elkhart County Jail.

“You’re kind of trapped in this cave, and you look out, and journey out, and, off in the distance, and see these green fields and sky,” Martin said. “And I think it’s symbolic of where (inmates) are at here in life now, and what the future looks like.”