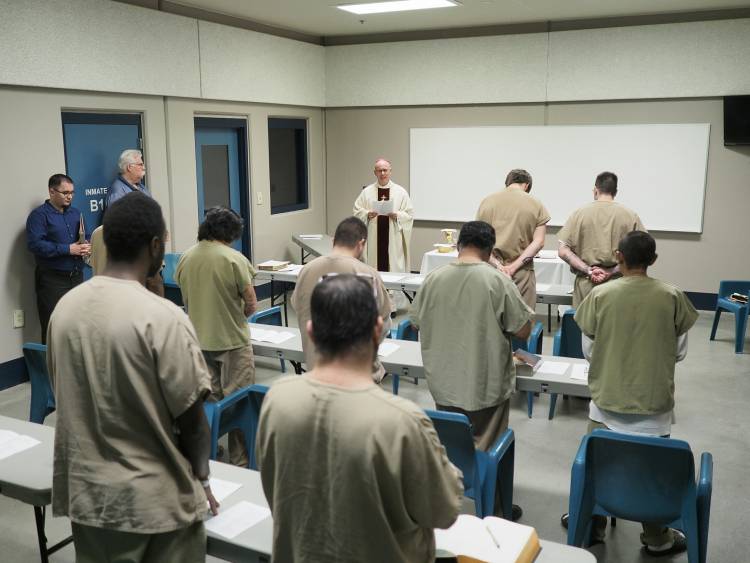 1976: that’s the year when, at the age of 16, David was sent to prison. Forty years later, when he was released, things were different: His family members had passed away and his friends had scattered. He had no network, had never held down a job and had little knowledge of the changes that had happened in the world since he was incarcerated.

“It was overwhelming,” he said. “I really struggled with knowing how to live with people out here. I didn’t know how to do anything.”

That’s where the Allen County jail ministry team stepped in. “They helped me with everything,” David said. “Applying for jobs, all sorts of paperwork, clothes on my back, a bicycle for transportation and paying rent so I wasn’t on the streets.

“Even picking up and using a cell phone was difficult, because I had no contact with devices in prison. They weren’t around 40 years ago,” he continued. “In prison, they don’t prepare you to be released. All I knew was the old-fashioned stuff from when I went in.”

But, through tears, David shared that, “I’m 56 years old, and I am very happy to experience God on a very different level, through being free. I can talk to him better. I love it out here. I often think about all the people God put in my life. You really can’t say thank you. It’s somebody starting your life for you.”

Allen County is one of six counties across the Diocese of Fort Wayne-South Bend that has a jail ministry team. It started about three years ago, and now parishioners from across Fort Wayne regularly help with every component: Bible studies, religious services, a book cart, onthe-block fellowship and more. The St. Vincent de Paul Society hosts an annual collection to help indigent inmates be able to have undergarments issued to them through the chaplaincy office.

Elkhart County is the newest of all the diocesan jail ministry teams. Recently founded through the work of Mark Griffin, the team of five or six individuals hosts discussions, religious services, and Bible studies for their incarcerated brothers and sisters in Christ.

In Huntington County, the jail ministry team does not currently go into the county jail; rather, their points of encounter include requests from family of inmates for spiritual accompaniment, pen-pal requests for soon-to-bereleased inmates and reaching out to released inmates to recruit their wisdom and vision for building an impactful ministry.

For this Year of Mercy, the Huntington County team launched a special effort geared especially towards those with family members in jail. On Nov. 15, they will also host a lawenforcement appreciation dinner.

Jail Ministry volunteers in Kosciusko County are focused on long-term plans. Founded two and a half years ago, the team participates in monthly visits to Catholics who are incarcerated: holding prayer services, bringing the Eucharist and engaging in times of reflection. They hope to form a LifeSkills class for people coming to the end of their sentence and aiming for a productive re-entry.

Marshall County, too, is in the early stages of forming its jail ministry. Gene Clingenpeel has been helping inmates as they face re-entry barriers such as finding housing and jobs. Working with Deacon Greg Gerherd of St. Joseph County, Clingenpeel and area churches are also trying to form a network that can more effectively reach out and walk alongside people as they re-enter society.

One of the oldest jail ministry programs in the diocese is in St. Joseph County. Coordinated by Deacon Greg Gehred, a team of priests and few Notre Dame graduate students visit the jail for Sunday Mass, Saturday fellowship and Tuesday one-on-one conversations.

“There is a need for mentors and people to help at the Juvenile Justice Center here in South Bend. There is also a crying need for more housing and support for men and women coming out of jail and out of the state prison system,” Deacon Gehred shared.

Audrey Davis is the Social Justice Ministries coordinator for the Diocese of Fort Wayne-South Bend. She recognized that each jail ministry team comes into contact with these individuals in a different way, but that each one’s responsibility is similar. “Our response is to walk aside re-entry members and learn from them: What are the main barriers impacting families in poverty, leading them to jail, and what can we do to reduce those barriers?”

These teams aim to follow Christ’s model of “encounter, relationship, and response,” she added. “It is our constant vocation to form relationship with the families struggling from poverty and crime in order to understand how to form a social ‘response,’ not just to individual cases but through public expression of our values of forgiveness, human dignity and participation in family and community.”

To learn more and to become involved in jail ministry locally, visit www.diocesefwsb.org/JailMinistry.