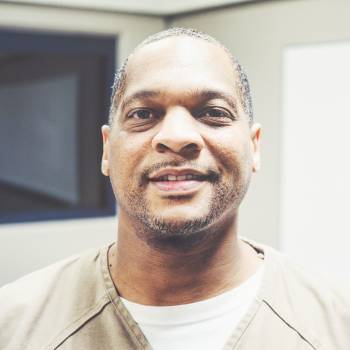 My name is Michael and I’m 43 years of age and I’ve had a rough go at life for the most part, but it’s basically my own fault.

My parents were proud parents but couldn’t seem to get along. When I was 7 years old my parents split and divorced, leaving my sister and myself in a single parent home. We did all we thought we could to make things easier on our mother. We made good grades, did the chores and behaved like properly raised kids are supposed to.

I started playing sports in school, basketball, baseball, football and track. I was a natural at all those but basketball quickly became my favorite. I stood out above the rest and instantly had the eyes of everyone on me.  I began to get a big head/conceited, and I ventured into other avenues….the streets! I shifted from good school kid to a slick street kid. I allowed others to influence my behaviors, but they learned fast that I had to lead the pack.

By age 13 I was smoking marijuana, hanging out all night with a bad crowd. My parents constantly spoke with me about my negative behaviors and told me it would bring nothing good. I got myself in a world of trouble when a fight broke out between rival neighborhood crews and I got myself a battery charge. The battery charge gave me a tough/cocky attitude on the street, because now I had a reputation to protect.  After I received my second battery charge plus a truancy charge I was sent to boys school. Over the next three years I made four trips to Indiana Boys School. I continued to stay in the streets and even joined a gang. Things really started to spiral out of control after that.

By the time I turned 16 I was using & dealing drugs. Not just marijuana, but now also cocaine. All of my so called crew had been waived as juveniles and sent to adult prison. Something I thought I was too slick for.

I ended up doing an armed robbery to pay for some product (Cocaine) that I lost while running from the police. I was caught and charged, but received a light sentence that landed me back on the street. I was on probation for the Cocaine charge when I was arrested for dealing Cocaine, which ultimately sent me to prison.

While incarcerated I toyed with religion because I wanted to do right. But that’s all I did was toy with it.
Soon as I was released I went back to partying and hustling…turning my back on God again. I AGAIN got caught dealing cocaine and was sent back to prison where this time I finished getting my degree. After I was released from prison that time there was something different in me. I felt the need to help others from going down the road I had taken. More so the youngsters. I discovered that I was a natural at influencing others to do better. Around this time I learned my cousin was murdered by some guys trying to rob him. That sent me into a rage and I wanted revenge. But my auntie, his mother, is a Pastor and she refused to let me seek revenge I his name because as she put it, “God will handle it. Leave it in His hands.”

I broke down after my cousin’s death and made a mistake by smoking pot. I failed a drug test which is why I’m back in the Elkhart County Jail today. I have been here for one year.

While I’ve been here I’ve asked God to come into my life & remove the anger that was in my heart about my cousin.  I turned my life over completely to our Lord and Savior Jesus Christ. I’ve been baptized and saved. I’ve encountered numerous volunteers who relate to me very well...volunteers who have taught me the Word of God and have stayed beside me during my time here.

I want anyone who is bearing witness to this testimony to know that God is real and if you allow Him to come into your life you will definitely be a better person. I’m not saying it will happen overnight, or he won’t give you a “wake up call”. Make no mistake about it, sooner is better than later. Are you saved and ready to go into His Kingdom right now if He comes? I AM! And I would love to see you there. Embrace God, don’t run from Him.

Michael AKA The Podfather
< Back to Testimonies